A Community of Shiloh Rifle Enthusiasts

Getting ready to cast.

Talk with other Shiloh Sharps shooters.

Getting ready to cast.

The pot is full with 16:1, has been fluxed & is up to temp (770° is what the mould likes with this alloy). The mould is on the hot plate & being monitored as it comes up to temp. I like the mould around 450° when starting. The wet towel is ready to drop bullets on. I will be casting 200 bullets in this session – keeping 180 for 3 matches. 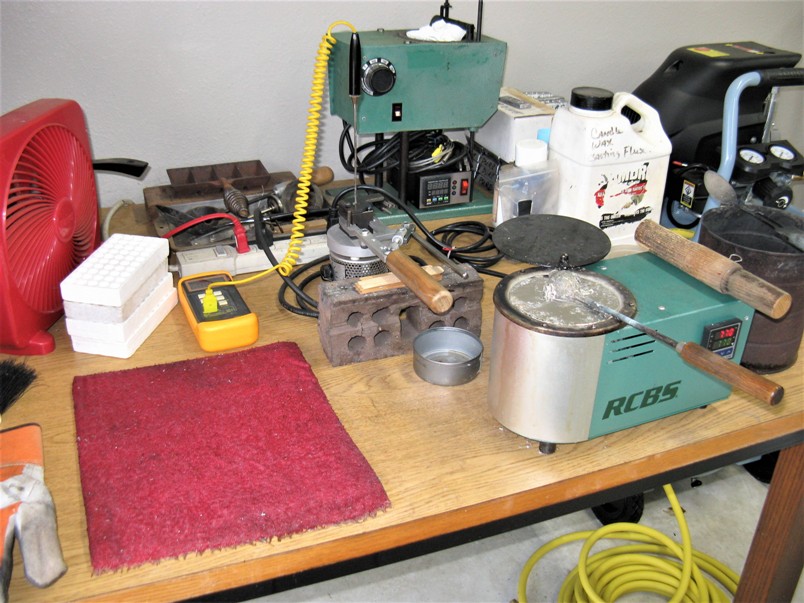 That's just way too neat!
You need to clutter it up a bit, you know, tools left over from the last 5 minute job that took an hour, power cords on the floor to trip on, timber off-cuts in the way, power drill still settin' where you left it and swarf everywhere, etc.etc...... It looks like you're organised or something?

Out in western NSW where it don't rain much.
Australia
Top

Never needed a wet towel.
I just drop on a doubled over terry cloth towel and let it sit till I drop the next bullet.
Gary
"Hav'n you along, is like loose'n two good men"
Top

And here’re the results of the 200 bullets sorted, which I think you’ll find interesting. You 1st impression may be that this guy has a problem with his casting technique since there are clearly two distinct bell-shaped distribution curves. But let me explain. The batch on the left was with an alloy temperature of 770°. The batch on the right was at 775°. That’s the only difference between the two. Everything else is the same, same alloy, same casting technique, etc. I just cranked up the pot temperature by 5° resulting in a shift of 0.6 to 0.7 grs in the bullet weight. Although this was expected since I ran a similar experiment some time ago, but over two separate casting sessions, I thought I’d try it again during one session just to double check my previous results.

There is some crossover between the two batches and the few lighter weight bullets on the left of the 770° curve were definitely cast when the mould was heating up although it was pre-heated. If nothing else the results will give you some idea of the difference in bullets weights due to changes in you pot temperature, irrespective of you casting technique. Also interesting is the 775° distribution has a tighter curve (lower standard deviation). 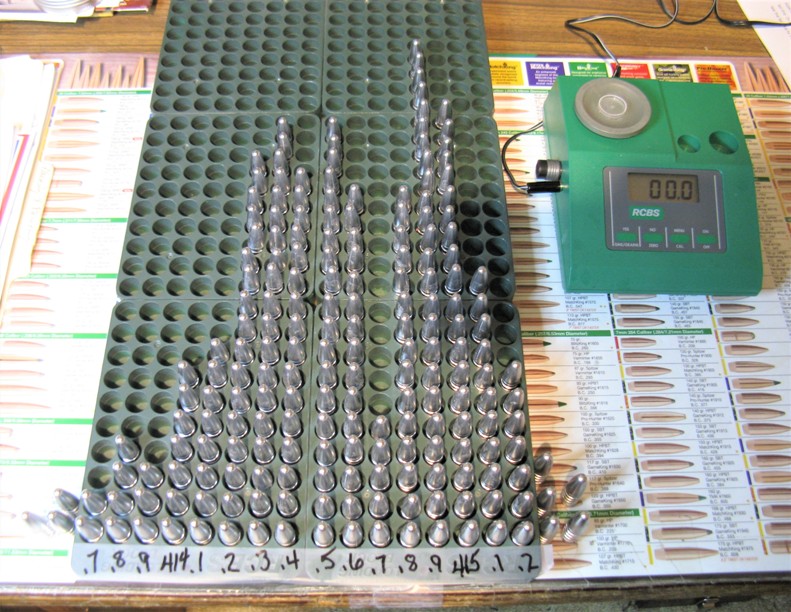 BTW, below is the link to the thread where I reported the earlier results of approximately a 1gr shift when casting with a different mould and changing the temperature from 765° to 770° and back during three separate casting sessions.

Am in agreement with Daniel. A clean casting bench is the sign of a sick mind.

I built a bench with an activated carbon filter on a 200cfm bathroom exhaust surrounded under the pot, side & back with sheet aluminum and I've got 10# of lead splatter, flash, etc. built up over the years that will eventually get recycled into the pot. Miscellaneous allen wrenches, brass-bristle brushes, molds, handles, whatever makes it go faster/better. That spread in your bullet weights is likely due to the clean bench. It is obviously telling you something.............

your never lost, if ya don't care where ya are
Top

This is a joke, right? I want to see a video of your casting session. I don’t let kids or dogs near me when casting for all the splatter.
Top

I'm not a neatnik by any definition but Wayne's set up looks pretty reasonable to me, though maybe a bit cramped.

What spatter? Spattering lead is really NOT a good idea.
Top

Perhaps Daniel and SSShooter are on to something in that certain behavioral characteristics manifest themselves in a way that may seem normal to the possessor, or others likewise afflicted, yet clearly indicate an aberration from the norm to the observer in general.

Wondering if there is a point where an obsessive compulsive disorder becomes pathologic?

Irregardless, I suspect the bulk of the readership here has over time developed an immunity to the disorder no mater the intensity of the contagion.

Consider me somewhat anal-retentive, maybe due to my engineering background or possibly from my mother’s potty training.

But I like to keep my work benches and casting area clean and organized to some degree. A photo after the cast session would have included some small pieces of scattered lead, mostly between the towel and the pot, that fell off the mould plate as the mould is being opened. Don’t get me wrong; I’ve splattered a good bit of lead prior to learning how to cast safely, and every now and then things don’t go as planned although I rarely have a splattering issue other than some small drops once in a while when the sprue is cut & dropped into the pot, especially when it's full.

That would be way too much work. But if you decide to run the experiment I'd be interested in the results.

Where is your eye protection? Your face mask to cut the fumes?
the fans to blow out the lead in the air?
you should be casting in the garage next to the open door.

If you don't do this you will breath in lead fumes and loose your memory.

What were we talking about????
Top

Where is your eye protection? Your face mask to cut the fumes?
the fans to blow out the lead in the air?
you should be casting in the garage next to the open door.

If you don't do this you will breath in lead fumes and loose your memory.

What were we talking about????
Top

You're suppose to be paying attention to the test results not my so called obsessive compulsive disorder as DD put it. BTW DD, are you a lawyer or, cough, cough, an ex-politician? I had to reread your post a couple of time before the big words made sense.

Return to “Shooter to Shooter”